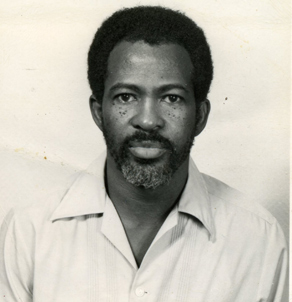 Sydney Ignatius (Foggy) Burrowes attended Kingston College (K.C.) between 1943 and 1947. Many believe that he was the most influential student to wear the school’s colors.
As skipper (captain) of athletics and cricket, and a key member of the football (soccer) forward line, he was involved in every phase of school life. On joining the teaching staff he became sports master, while studying for the Inter-B.A. Degree of London University. He represented Lucas Club at cricket and football until polio ‘struck him’ in 1954. He returned to teach at KC aided by metal braces and a motorcar fitted with manual controls. It was for many students their first object lesson in adversity and how one may deal with it. He then sold insurance and finally published “Sports Life Magazine”, along with Errol Townsend.

Many stories are told and written about him and his theories, among them: Jamaicans should regard any Olympic finalist as a hero; G. B. Grant (the Flying Farmer – School of Agriculture Athlete) and G. C. Foster were the best ever athletes; Jamaican women would be the future bearers of our Olympic hopes. He encouraged his students to write poems and plays praising K.C. and Jamaica. But it was his motivational talks, attitudes and schemes that affected every boy at KC in his time. He organized the “Faculty” of old boys who coached the Inter Scholastic Track Athletics Championship Team to its remarkable fourteen (14) year run, and “never ceased convincing boys that each one had a kernel of greatness in them”.

THE NEW YORK YEARS
Foggy arrived in New York in 1980 and along with a handful of individuals, turned the idea of an alumni association into reality. In those days, Wolmers and Alpha Academy were examples of well established past students associations. He reached out to these associations and along with Ossie Bartlett, Jeff. Barnes, Ricky Blissett, Bunny Golding, Peter Jograj, Charles (Luddy) Lodenquai, Noel Spencer, Michael Williams, Basil (Bagga) Wilson and others, they sought out KC past students (old boys) wherever they lived. He reasoned that old boys should be a force for good wherever they lived. “When in Rome do not do as the Romans do”. Meaning, do what you know is right, not what is popular.
That thinking led to a variety of fundraising events and the policy of ‘giving back’ was clearly established. Towards the end, he admitted to being stricken by the “Joseph Syndrome”: Just as Joseph sent back corn from Egypt to Jerusalem, so I will try to send back what I can to Jamaica and K.C.”

Foggy came to New York with a variety of skills and experiences and soon resumed his old callings of teaching and coaching at New York Institute of Technology. During his spare time he traveled from function to function in his Ford Granada, discovering what organizations could mean to “those back home”
When it seemed unlikely that New York (KCOBA USA) would finance the annual May Fair in 1986, he merely observed that “ Jamaica’s and KC’s needs are like a man having a thousand acres and not having the money to till them. So he tills the ten (10) most fertile acres this year, and next year he tills a few more acres”. The May Fair was a most fertile acreage in his estimation. The annual Boat Ride was another. He also believed in a Trust Fund for the school.
January 29th, 2007 marks twenty (20) years since the passing of this remarkable man. Persons from all over the United States attended his funeral service at St. Lukes Episcopal Church in The Bronx. The Very Reverend Dr. Patrick Walker officiated, with Donald Morris as organist. Executive member Dr. Basil (Bagga) Wilson delivered the remembrance. The casket was draped with the KCOBA banner, in accordance with his daughter’s wishes.

In one of the more touching moments in the service, Father Walker described some of Foggy’s last moments with him. He concluded, based on their discussions, that he was dealing not only with a good family man, but a man of principles, who stood for justice, causes, opportunities for others and improvement for his fellow men. In tribute, Fr. Walker ended his sermon with the immortal words “ I expect to pass through this world but once: anything, therefore, that I can do, or any kindness that I can show to any fellow creature, let us do it now; let me not defer nor neglect it, for I shall not pass this way again”

TRIBUTE
Foggy walked with the aid of metal braces to his legs, which seemed to propel him almost effortlessly. One had the impression of a man in constant motion who seemed unaware of his impairment. He was a man of action, a man always moving his causes, and his society forward.
He was the New York (KCOBA USA) president in its formative years. At the beginning, it was a one- to- one-approach. Foggy took the initiative building a mailing list and traveling from function to function for the cause of the association. After the collective that was to become the Association, Foggy stepped down. He argued that he was not able to give KCOBA USA adequate attention.
Foggy was at the helm when we honored Douglas Forrest, when the KC Chapel Choir toured the United States and when we first donated gears to the track team. And it was Foggy who sold the association the idea of supporting the annual May Fair.
KCOBA USA is only one of many enduring organizations that benefited from his efforts. He was proud of his native land and wanted Jamaicans to be a proud people, so he joined with other organizations for causes other than KC. In particular he sought to ensure Jamaica’s presence at world athletic events.

By the time I joined the Association in 1984, Foggy was ready to step down as president but some of the association’s stalwarts of earlier days were present. Ossie Bartlett (treasurer) and Harold Brady (attorney) had already incorporated the association under New York State Law. In addition, Ossie exercised shrewd control over the association’s limited funds .He personally took on the risk of financing early fundraisers. Also present were: Bunny Golding, Ancell Harris, Noel Spencer and Basil (Bagga) Wilson.
For me, as for many old boys, to whom Foggy regularly talked his presence was a personal and direct connection with our past. With his passing KC and Jamaica lost one of our most compelling symbols- a symbol showing that people can inform themselves, propose, dream, reach, build and succeed in making a part of their world a better place.
As a public person, it was his ability to understand his world, respond and influence it in a positive way that most endeared him to many. He taught History and was the consummate historian. He sought to better the lives of others and truly believed in the interdependence of mankind. No Man Is An Island; No Man Stands Alone (Francis Bacon) He made it the theme of his farewell address at Tardis on October 19, 1986.