Home KC Old Boys Give Back

KC Old Boys Give Back 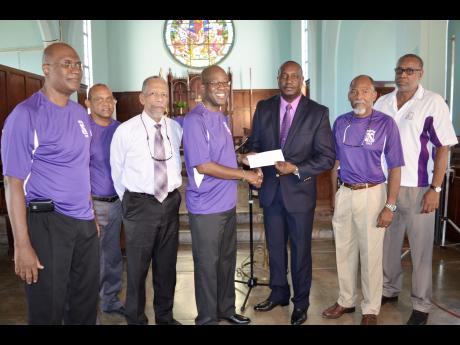 There is a special spirit of commitment and dedication that resides deep in the heart of every Kingston College (KC) old boy.

This spirit manifests itself in an undying devotion to the school which significantly nurtured and fashioned that character which is found only in the ‘Fortisians’. For some time now, the class of KC old boys who graduated in 1973, have been planning a weekend of events to give further expression to their love for their alma mater. The events kicked off last Thursday when a representative group met at the school’s North Street campus to make a special presentation. The old boys made a gift of J$1 million to the school, for the purpose of assisting with the construction of the Douglas Forrest Educational Resource Centre to be located at North Street.

The funds were garnered primarily through personal donations from old boys who attended KC between 1968 and 1973. President of the group, Hugh Reid, expressed his personal pleasure at being able to make the contribution, and felt assured the funds would be put to good use. In accepting the donation, principal Dave Myrie expressed thanks on behalf of the school, and appealed to the old boys to, as far as possible, also assist the school in mentoring some of the present students. There was an understanding that the alumni would continue their engagement with the school, lending support wherever possible.

Other activities planned for the reunion included a luncheon at Alhambra Inn, a church service at the school’s St Augustine Chapel, and supporting the final day of the ISSA/GraceKennedy Boys and Girls’ Athletics Championships on Saturday.