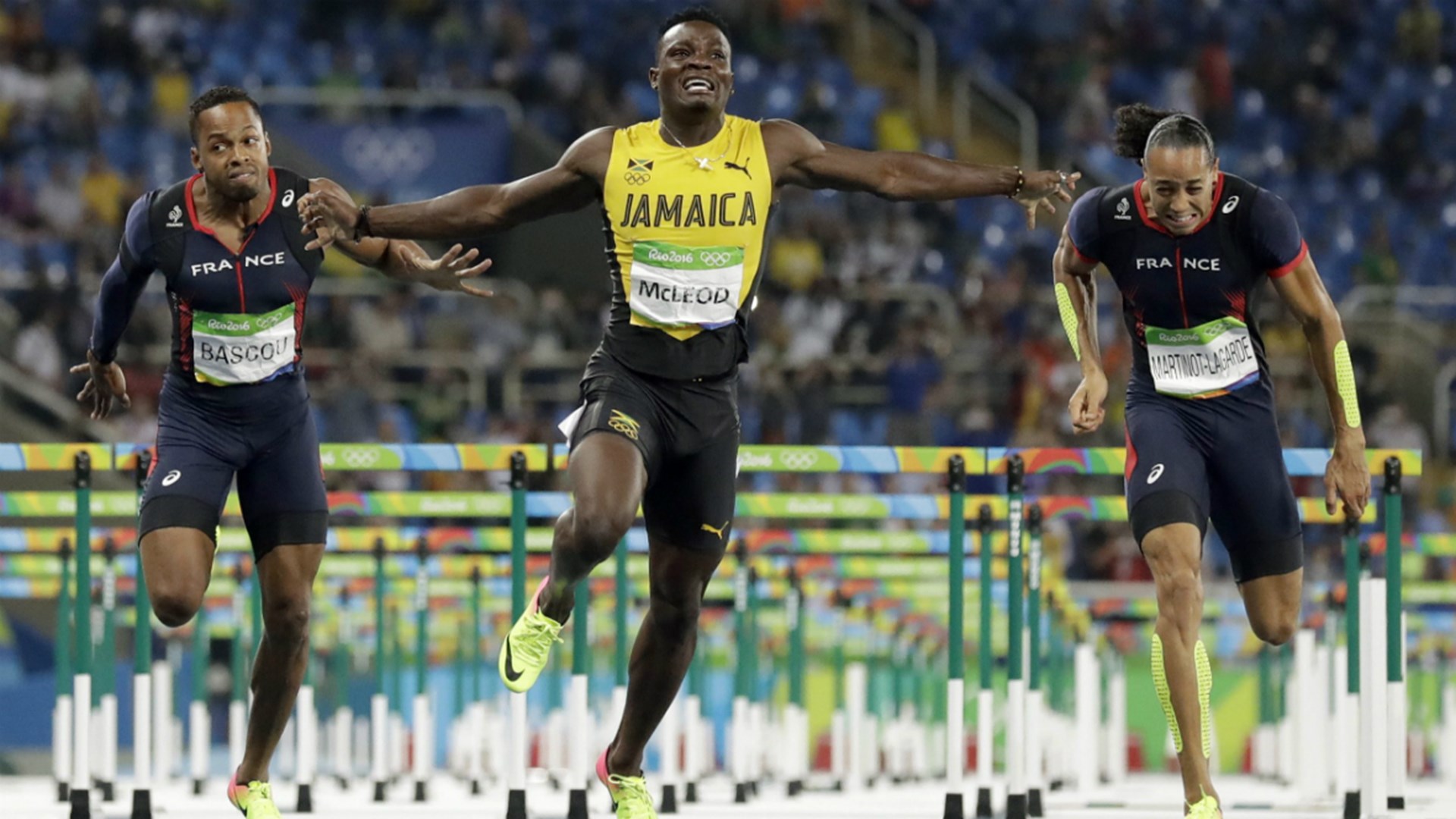 Jamaica’s Omar McLeod (centre) reacts after winning gold in the Men’s 110m hurdles final flanked by the French pair of Dimitri Bascou (left) and Pascal Martinot-Lagarde inside the Olympic Stadium.

Rio de Janeiro, Brazil — Omar McLeod became Jamaica’s first Olympic Games 110m hurdles champion with a near flawless performance as he landed gold in 13.05 seconds here at the Olympic Stadium last night.
McLeod, who was been heavily fancied to cop gold after an outstanding season where he totally dominated, delivered in style and secured Jamaica’s third gold of these Olympic Games and its fifth overall. He joins 100m champions Usain Bolt and Elaine Thompson as Olympic champions.
There was a bit of uncertainty surrounding McLeod’s form as he crashed out in his last two pre-Olympics outings. Earlier, the 22-year-old had easily won his semi-final in an effortless 13.15 seconds, and the writing was on the wall.
Running out of lane five, McLeod got a good start and despite the attendance of Pascal Martinot-Lagarde of France on his left and later the fast-closing Orlando Ortega of Spain, he was in unbeatable form as he powered away for a most impressive victory. Ortega grabbed second in 13.17secs ahead of Dimitri Bascou of France in 13.24secs.
I am elated; the feeling is honestly indescribable. I don’t know what’s going through my mind right now. I need to go back and recite it a couple times, saying you are Olympic champion,” beamed McLeod, proudly wrapped in the Jamaican flag.
Only recently McLeod became the first man to run the 100m under 10 seconds, clocking 9.99secs, and the 110m hurdles in under 13 seconds in 12.97secs.
“You guys know my journey. It’s been an up and down year; I had a mishap, but I never dwelt on it. It was a kind of a humbling experience — not that I am a cocky person; humbling to the fact that I came to the realisation that things happen in the sport. You are never guaranteed a perfect career and you have your downs, and it was just a test of character and I bounced back well as if it never happened,” he explained.